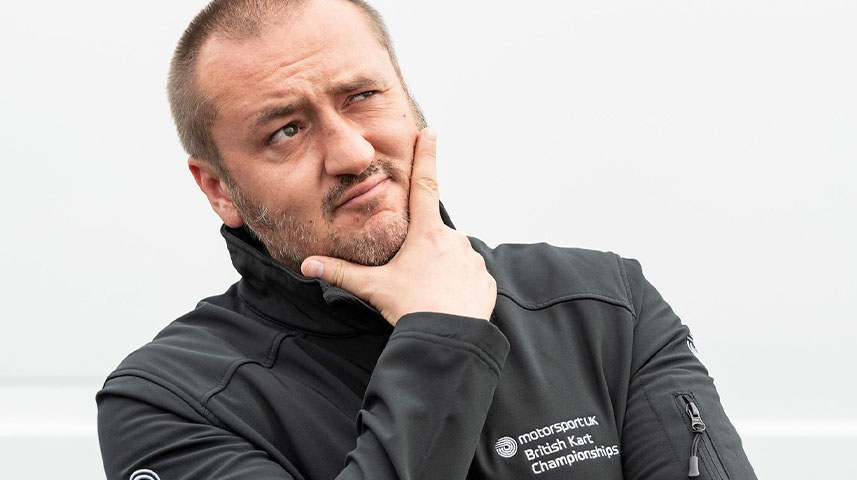 GETTING BITTEN BY THE BUG

If you are reading this then it is safe to say that one of two things has happened. One: You have too much spare time on your hands and you are trying to distract yourself from doing something meaningful, like work, study, sleep or completing the dreaded DIY project that you promised your better half you would do during the first COVID lockdown OR you have experienced the phenomenon that lies behind door number two. Option two is the most likely scenario and the one I can fully sympathise with; you are reading this because you have been bitten by the bug, the 'Racing' bug. Like a high speed version of The Walking Dead, once you are infected there is no cure and to the eternal frustration of your family, friends, loved ones and most of all your wallet, the exact moment you got 'bit' will remain etched in your memory like a petrol scented, oil stained stamp forever more. My name is Henry Beaudette and this is when the racing bug struck me.

Picture the scene if you will. It is Monday morning June 24th 1985 and in a small terraced house situated on Barry Island in South Wales, Mr and Mrs Beaudette believe they have just found the solution that will keep their toy car obsessed four year old son (that's me by the way) occupied during the occasionally fraught weekday morning rush as Mr Beaudette got ready to go to work as a primary school teacher and Mrs Beaudette got ready to take said child to playgroup. Their solution? Utilise their brand new VHS Video player to record BBC2's highlights of the previous days United States Formula One Grand Prix which took place in Detroit and then place said child in front of the recording and hope that he would allow them to get ready on time and in relative peace.

Oh how little did they know what they had just done.

I was enchanted, enraptured, instantly obsessed and completely hooked. From that point on, racing in all its many forms, has been not just a part of my life, it has BEEN my life.

That Monday morning was the day I saw my first racing car. It was the day I first saw a motor race, it was the day I first heard the voices of Murray Walker and James Hunt. The sounds, the colours, the drivers' names, their brightly coloured crash helmets, the blue skies and concrete lined streets and buildings of a city thousands of miles away but brought crashing into my living room courtesy of a BASF Video cassette and a VHS machine roughly the size of Basingstoke. I was enchanted, enraptured, instantly obsessed and completely hooked. From that point on, racing in all its many forms, has been not just a part of my life, it has BEEN my life.

I watched and re-watched those 30-minutes of edited highlights day and night. I watched that race until the Video actually wore out and the dreaded line grey and white line of snow obscured the picture. Even now every detail of that 63 lap race won by Keke Rosberg in the stunning yellow, blue and white Williams-Honda is seared into my memory as is the beautiful black and gold car driven by a driver with a yellow crash helmet who I would soon learn had more talent than everyone else and a British driver with a red number 5 on his car who I was drawn towards and who became my favourite. I had an unquenchable thirst for knowledge about this new sport that I thought about morning, noon and night. Thanks to my parents, who caved in to my constant nagging and kept providing me with magazines, books, newspaper cuttings, posters and pictures about the 1985 Formula One season, I learned how to read, I learned the flags of the world, I learned how to say exotic names like Piercarlo Ghinzani, Phillipe Alliot, Minardi Motori-Moderni. I discovered history and geography and could name every country on a world map as long as it had a Grand Prix track on it and soon my curiosity led me to learn about other countries, their flags and their racing venues and their history within motorsport. Every driver has to thank their parents, so does every commentator, at least this one does.

Although my family had no previous connection to racing, I soon changed that and my obsession gradually became theirs. Racing has given me so much more than a job. It has given me happiness and heartbreak, pleasure and pain. Within four months of my eyes first settling on the class of 1985, two of its members had perished and my parents had to explain the darker side of motorsport and why I would no longer see the green and white RAM-Hart of Manfred Winkelhock and the dark blue Tyrrell of Stefan Bellof on track. It taught me how to deal with that horrible ache in your heart when part of something you love goes away but it has also given me a thousand more memories that replaces that ache with joy. Towards the end of that first magical season, I vividly remember sitting in a small wooden chair in my nan's house on Barry Island with my nan on one side of me, my great aunt Teed on the other side, my dad's cousin Jo on the sofa opposite and her German Shepherd called Rover on the carpet in front of us as we watched and cheered as my favourite driver, the one with the red 5 on his car and the Union Flag on his crash helmet won his first Formula One race. Everyone else in that room with me on that Sunday afternoon is now gone, but I can still see and hear their cheering as clear as day. THAT is the power of the Racing Bug.

If my parents ever had concerns that their plan to keep me quiet may be about to backfire they kept them to themselves. That is, however, until I first uttered the words that must strike fear into every family with limited means.

“Mum, Dad, when can I be a Formula One driver?”

But that is another story.