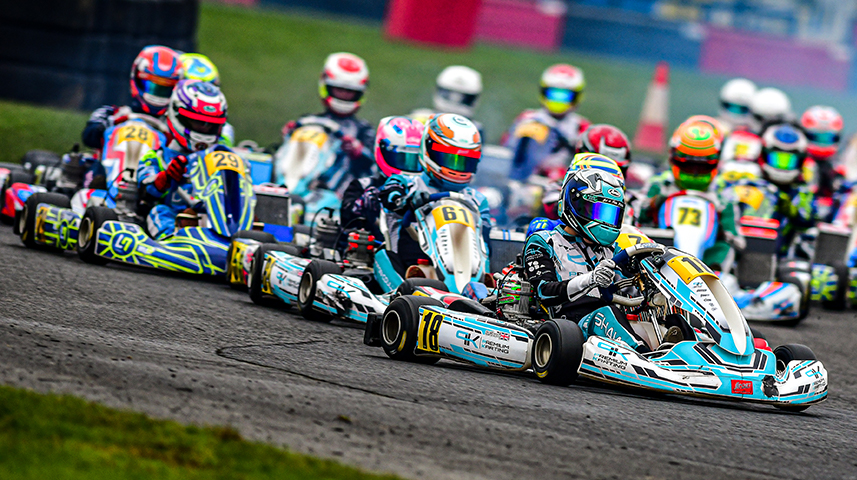 Yes, we are already approaching round two of the FastR Whilton Mill Kart Club season and, whilst you have full live stream to go back over round one, we at Alpha Live thought we would give you a quick rundown of how round one went and who to watch out for going into round two.

So take a pew, grab yourself a brew (other beverages are available) and enjoy our preview to round two, where Alpha Live will be filming all of Sunday's action

5 drivers lined up for round one of the ever popular Honda Cadet series, a field which included six novice drivers, two which made the A Final. With reigning champion Joshua Smith not entering the opening round and 2021 series runner-up Joshua Bugembe entering the Mini Max fold, Maayan Patel was the highest returning driver from last season's points, where Patel finished third. Unfortunately for Patel, the heats did not all go to plan and he ended up on a recovery drive in the A Final, moving up from 18th on the grid to finish 7th and finished as the biggest mover in the final. The victory in round one was taken by Rocco Shenton, who is regularly seen racing on the National scene. It remains to be seen how many rounds Shenton will enter with the driver not entering round two but he will certainly be a contender for the title if he completes enough rounds. Second place on the podium went to Jarrett Clark, following his front row partner through the race and finishing 0.27 seconds away from victory. Max Cuthbert rounded out the podium, who had Noah Barham glued to the rear of his kart throughout the 11 lap final as they thought hard with Finley Lines. This battle looked like being for fourth place for a while as Cole Denholm was deeply involved in the battle upfront, even passing Shenton for the lead up into Christmas corner. This would only last a couple of laps as Denholm disappeared from the timing screen. Whilst the transponder issue did not relegate Denholm out of second, a post race penalty dropped the youngster to sixth. 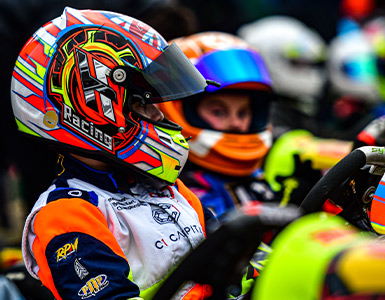 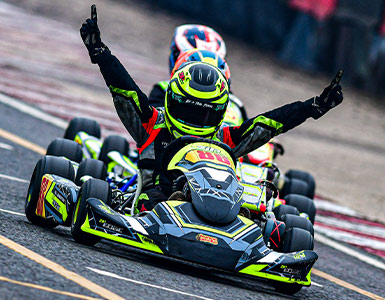 One to watch for round two will be Alexander Koedjikov, after he moved through from winning the B final and then moved a further ten places during the final to be just outside the top 20. Better heats and Koedjikov will be right in the battle.

With no Denholm or Shenton on the entry list for round two, it will be down to Clark to see if he can push on in his first full campaign in Honda Cadets? It's round two so it is still anyone's to challenge for.

Out of the 42 drivers signed up for the opening round of the Mini Max category, it was Finn Leslie who came out on top from pole position. Leslie, who ran away with the final unchallenged to win by 2.88 seconds, had built half that lead by the end of lap three and controlled the pace from then on. His job was made easier by the next two drivers on the grid, Noah Wolfe and Zac Green, colliding into turn one, sending them across the grass and down the field. William Murphy came home second after getting the better of Hugh Moulton and Michael Dalton, the latter falling back to outside the top ten after a trip across the grass at Ashby. What happened to Wolfe and Green I hear you ask? Well both returned to the track, Green quicker than Wolfe and they finished in 16th and 10th respectively. 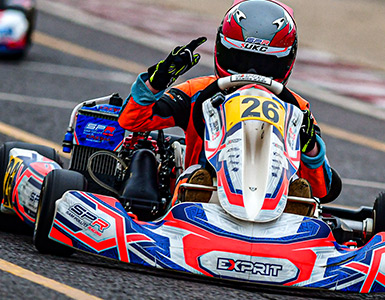 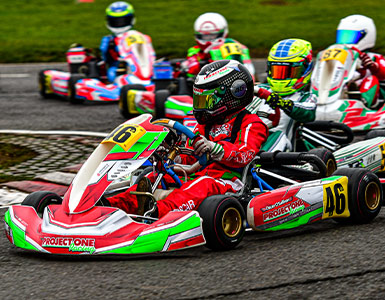 Zac Green is the one to watch for the next round. Green is known for his pace but,a front row, top ten and a fastest lap shows that he will be a danger in Mini Max this season.

After finishing second in the 2021 season, Finley Hinds will have been looking to start the new season at the top but showing how competitive the grid is this year, Hinds will have to wait for this weekend to kick start his season after finishing 11th in round one. In fact, it was Jessie Phillips who claimed victory after a battle between the top three throughout the race. The other two drivers in the battle, Jacob Ashcroft and Lewis Islin, rounded out the podium as their late race battle was not quite enough to allow Kit Belofsky and 'O' Plate holder Jorge Edgar to get close enough to threaten. The good news for round two is all of the drivers above are signed up for round two, except for Jacob Ashcroft. It may be early days but the pace of the top four in the race shows that it will be a really close championship as usual in Honda Cadet. 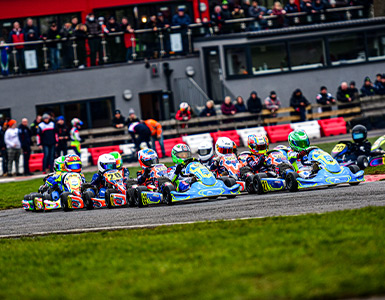 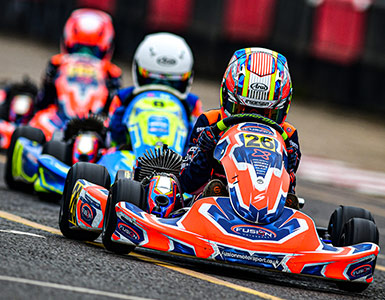 One to watch for this weekend is Edward Haynes, the novice driver qualified 19th in the Final and raced cleanly to a strong 12th place. An impressive job knowing that his heats were from the back with the novice plate.

The Junior Max A Final became a battle of two drivers very quickly. Neo Clarke and Gustavs Uskakovs built a small lead on lap one and that just continued to grow as the race reached the halfway point. The gap grew from two seconds to six by the end of the race and in turn, Clarke kept Usakovs at arms length to protect from any challenge and claim the first win of the season. The battle for third place was huge though with George Donald taking third place after starting the final lap in eighth place! He was helped by Ben Folland exiting stage right at Chapmans on that final lap but the rest of the group were too busy watching each other and with intelligent driving Donald carved through to the podium. 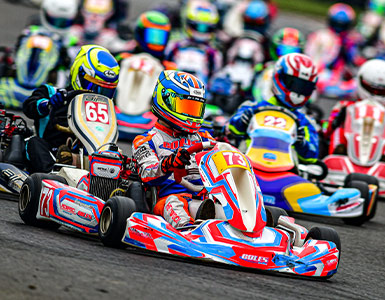 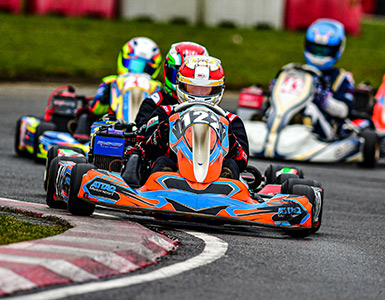 It's hard not to say Neo Clarke as the One to watch after the way he controlled the opening final of the season but my pick will be Jessica White. White, who won the final round of 2021, continued her strong form to move from eleventh to seventh and with a couple of better heat results, she will be looking to return to the top step of the podium.

The first final of the season in X30 was all about two drivers, World Champion Gabriel Stilp and British Open Champion Macaulay Bishop. The battle between the two heavyweights of the class was split early on after Stilp gave the lead away on the opening lap with a mistake at Parkers. This gave Henry Gregory a chance to run in second place but it only lasted a lap as Stilp soon regained his composure and the position. The gap between the top two closed quickly with the fastest lap of the race set by Stilp on lap five. As soon as the karts became close, the battle began and as they went onto the final lap, it was Stilp who led Bishop after making the move into Parkers with a lap to go. The move left Bishop a couple of tenths behind but a better run out of Crook gave Bishop one last chance and he took it. Stilp had to turn out at Christmas corner as Bishop dived from a long way back but all fair as he kept it tight to the corner. 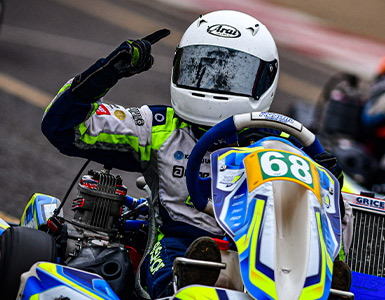 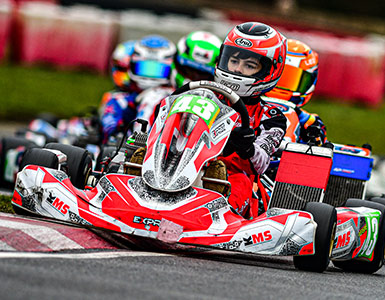 All the battling came a lap too late for Gregory, who finished less than half a second behind the top two. Fred Green and Cian Geraghty rounded out the top five. One to watch in the second round will be the 177 kart of Lucas Field. Field had moved through from nineteenth to eighth during the final but a front fairing penalty relegated Field to fourteenth. Keep it clean and Field will be challenging, especially with Stilp and Bishop not on the entry list for round two.

Ever since Lucas Ellingham joined the X30 ranks at Whilton Mill Kart Club, he has almost been unstoppable. After winning the Junior X30 class in 2020, Ellingham moved up to the Senior class for 2021 and took the title with six podiums out of eight Finals. So it wasn't unfair to expect something similar for the JDR driver in 2022, and you wouldn't have been wrong if you predicted it. Ellingham qualified on pole position and started the Final in dominant form, disappearing to a two second lead in four laps. That was where the Sunday afternoon drive ended for Ellingham as Sam Heading started to close the gap at an average of two tenths per lap. This left Heading needing one more lap to challenge the leader as he crossed the line just four tenths of a second behind. Sam Shaw followed Heading forward finishing just a second behind the winner. 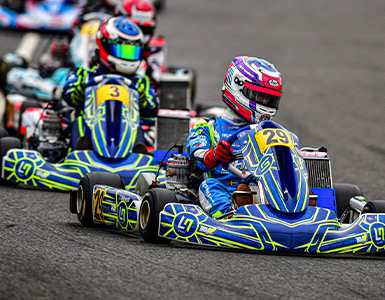 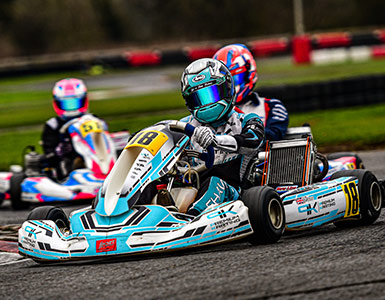 Maybe we are in for a super close fight this season? Who will stop Ellingham? The One to watch in round two will be Thomas Fleming. A great Final drive from thirteenth to fifth at the end shows that the pace is there for Fleming, including a best lap which was quicker than the winner.

33 karts lined up for the opening Senior Max Final of 2022 but it was Jack Steadman who claimed the win from the second row of the grid. Steadman got ahead of pole position holder Lorenzo Kordal in the opening laps and then held Kordal at a distance that denied any last minute sends. At the time of print, Kordal is not on the entry list for this weekend. Alfie Brooks rounded out the podium and chased down the leaders on the last lap but as many over the first round needed, Brooks needed one more lap to challenge. Scott Smith finished fourth after following Brooks in his chase whilst 2021 Junior Max Champion Ronnie Mansfield impressed with fifth. 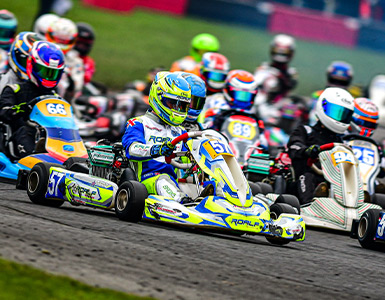 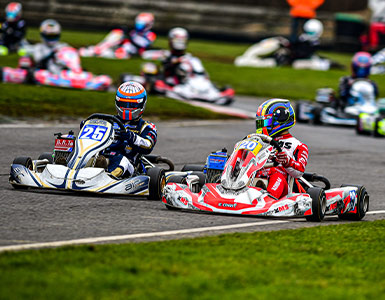 Samuel Hawthorne started as part of the lead battle but made a claim for save of the season with a huge drift out of Chapmans that you can see on the Alpha Live live stream on Youtube. Sam Spinnael has joined X-Kart for the season and drove well in the Final to take fastest lap and tenth place from twenty-first on the grid, in a kart that is still being developed in its second year and that's why Spinnael is the One to watch for round two.